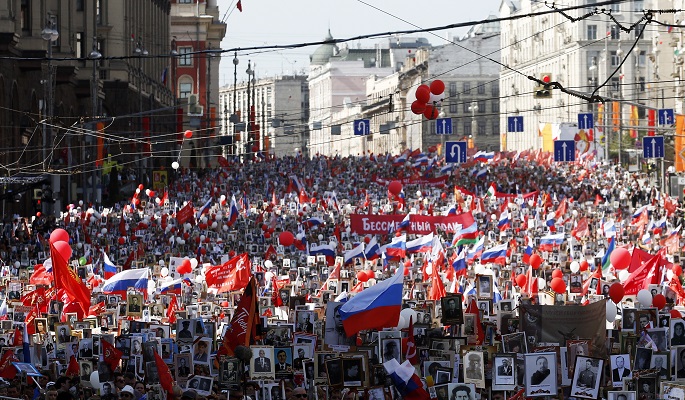 There are a lot of holidays in Russia: New Year’s Eve, Easter, Day of Russia, International Woman’s Day and many others. However 9th of May is the holiday which is still one of the most powerful and  grandiose.  There are less and less veterans of the Great Patriotic War, but thanx to some activists this holiday is known even by kids.

In the year 2011 in the Siberian city Tomsk several journalists Sergei Lapenkov, Sergei Kolotovkin and Igor Dmitriev decided to found a special action called “Immortal Regiment” or “Bessmertny Polk”, because they noticed that less and less veterans are taking part in street procession in honor of the Victory in the Great Patriotic War .

On the 9th of May 2012 the procession of people with posters of their relatives who took part in the Great Patriotic War 1941-1945th went out on the main street of Tomsk. This event became very popular and it was supported by other cities next years. In the year 2015th the Immortal Regiment was held in Moscow for the first time.

This action gathered around 600 000 people in Moscow in the year 2016. It is hard to imagine people with posters of their fathers and grandfathers singing Soviet songs and walking down Tverskaya street saying “Hurray”. This action is really touching…. And once you are in Moscow on the 9th of May on a business trip or as a tourists visiting Moscow, have a look at this procession and may be you will understand Russians more…. We are a very patriotic nation and we are very proud of our grandads who saved the country in the Second World War.