8 interesting facts about the Hermitage

8 interesting facts about the Hermitage — the largest museum in Russia! 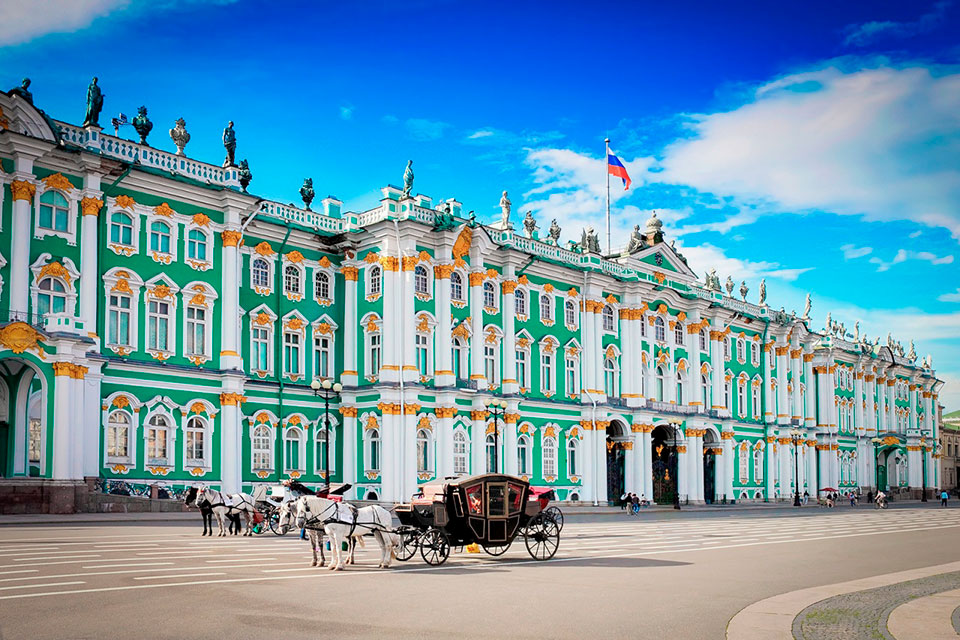 The State Hermitage Museum in St. Petersburg is recognized as the best museum in Russia and Europe, and it also entered the top three world leaders in a survey of tourists. We have collected the most interesting facts about this unique museum.

1. The main collection of the museum occupies five buildings located along the Neva Embankment in the center of St. Petersburg, the main of which is the Winter Palace. The museum's collection includes about 3 million works of art, from the Stone Age to our century. A walk through all 350 halls of the Hermitage is neither more nor less than 20 kilometers. And in order to stand near each presented exhibit or painting for at least a minute, it will take eight years of life to explore. 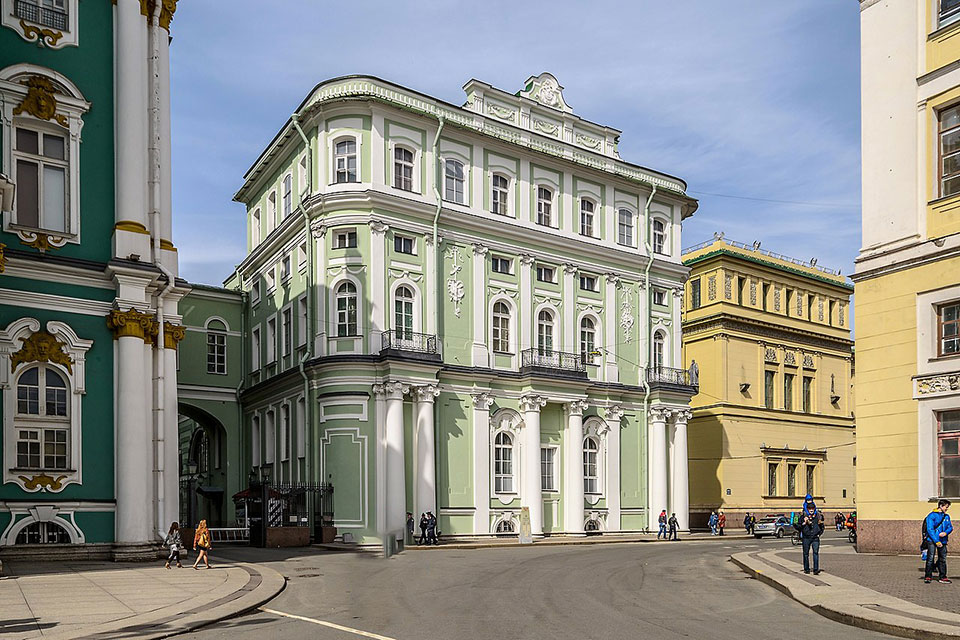 2. The name of the museum comes from the French word ermitage — a place of solitude, a cell, a hermit's shelter, seclusion. The fact is that initially the collection of works of art, which the Russian Empress Catherine II began to acquire privately, was housed in a special palace wing — the Small Hermitage. In 1852, the Imperial Hermitage was formed from the greatly expanded collection and opened to the public. 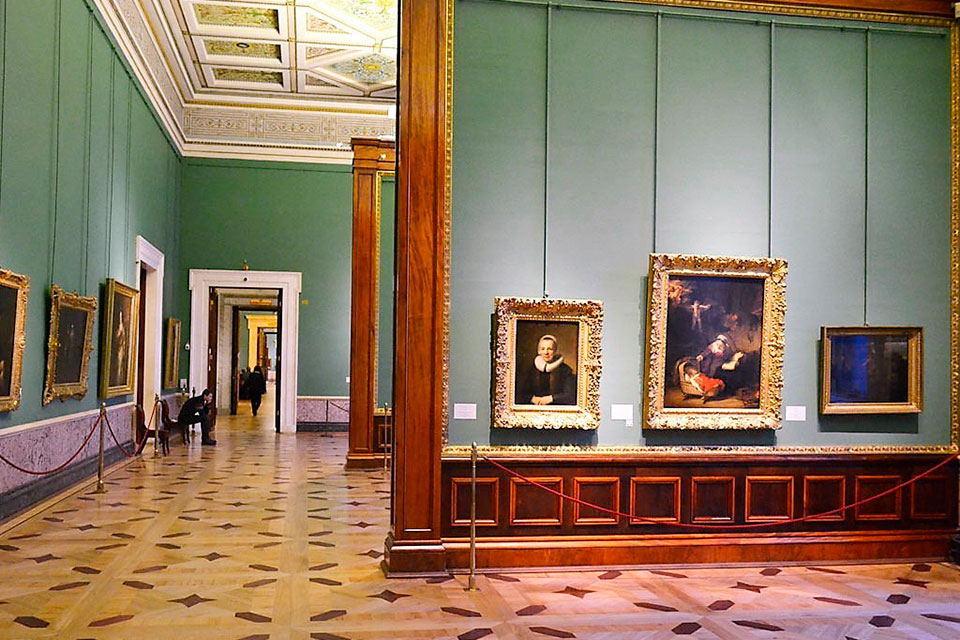 3. In the Hermitage, a separate room is reserved for Rembrandt's canvases, where 24 paintings by the Dutch artist are presented - the largest collection outside the Netherlands. This hall is considered a kind of museum in the museum, since most of the canvases ("Flora", "Prodigal Son", "Portrait of an old man in red", "Sacrifice of Abraham", "Removal from the Cross") are exceptional masterpieces. The isolation and emphasized high position of the "Rembrandt Hall" attracts a lot of people here, unfortunately, not always with good intentions. 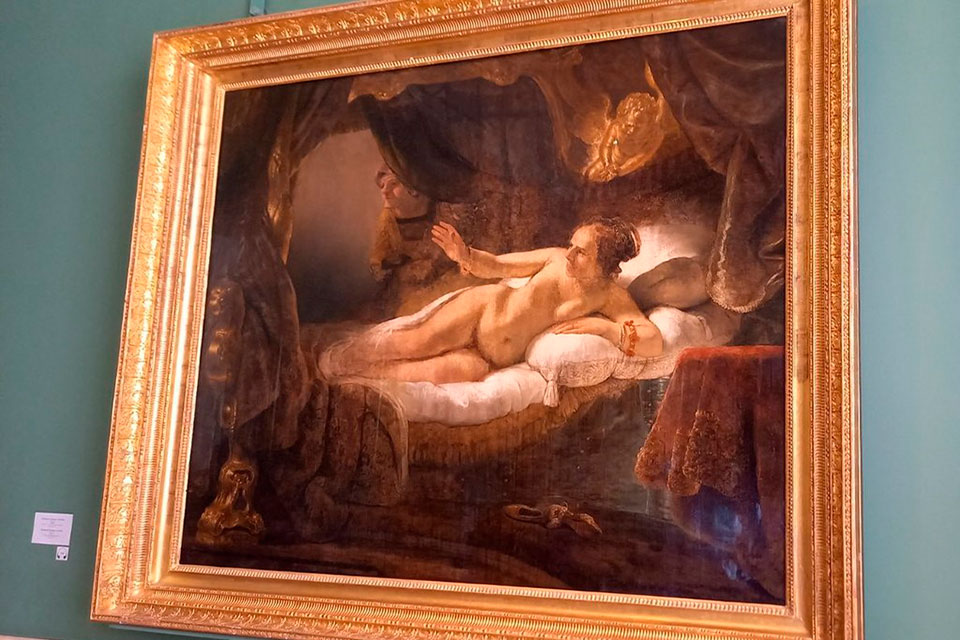 In 1985, the famous "Danae" was spoiled. A man came to the Rembrandt hall and asked the museum workers about which of the paintings in the hall were the most valuable. After that, he went to the "Danae" and threw sulfuric acid on her. The attacker also took out a knife and managed to cut the painting twice. 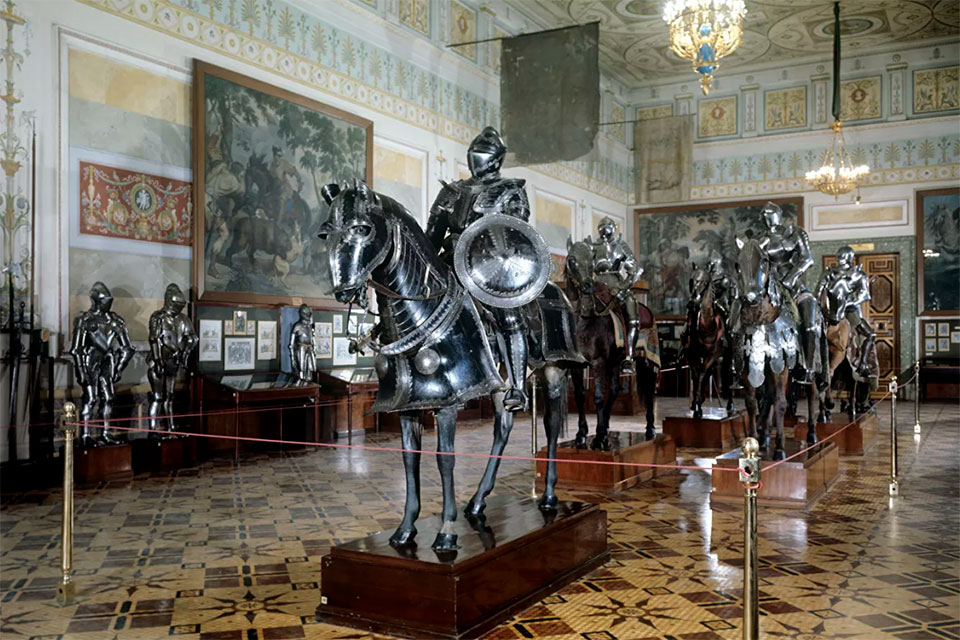 4. The Hermitage has an original museum ritual: in 2010, when it was necessary to restore the floors in the famous Knights' Hall of the New Hermitage, the transportation of mounted "knights" took place to the music of a military orchestra accompanied by the State Heraldmaster of the Russian Federation Georgy Vilinbakhov in full dress, thus honoring the ancient weapons and the memory of its valiant owners. 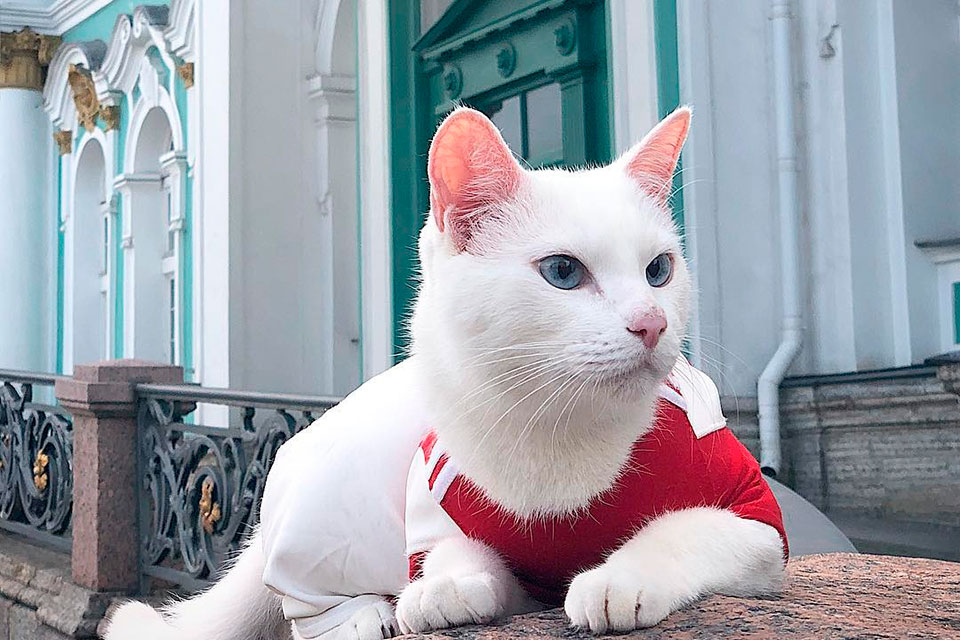 5. Several dozen cats live in the museum. They are called non-staff employees of the Hermitage. Empress Elizabeth Petrovna in 1745 issued a "Decree on the expulsion of cats to the court," according to which she was to be sent selected hunters for mice and rats. Catherine II gave cats the status of "guards of art galleries" and divided the animals into 2 classes – outhouse and indoor. During the blockade, the museum was left without this type of protection, but after the war, cats were brought to Leningrad in whole wagons, and some of the animals were sent to work at the Hermitage. The ranks of four-legged "guards" continue to be replenished: cats and cats are thrown into the territory of the complex every now and then, and the museum, in turn, further transfers the animals into good hands. 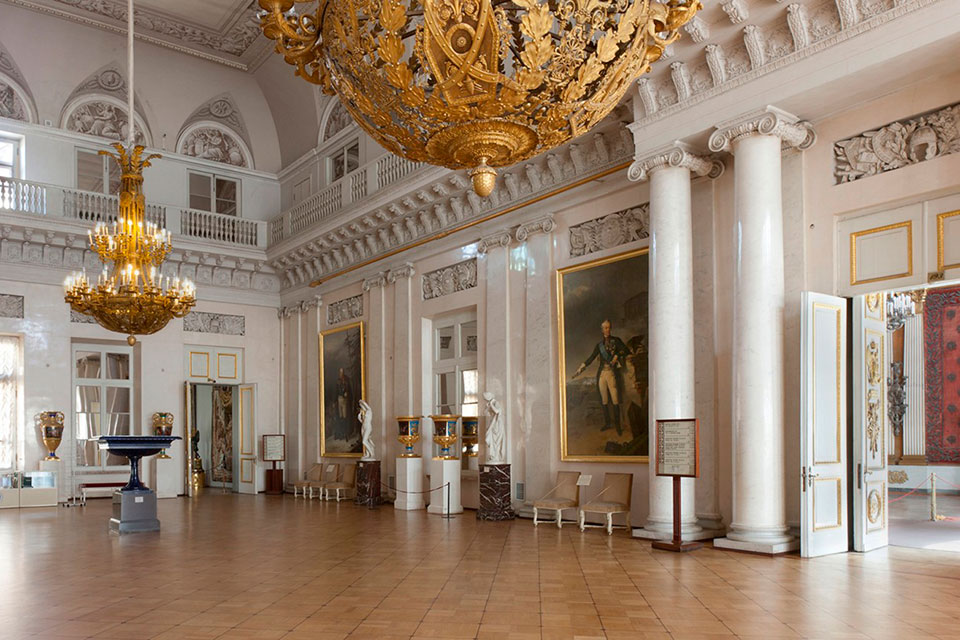 6. The Winter Palace is interesting not only for its collection of works of art, but also as the residence of the Russian tsars. So, the shadows of the last imperial couple of the House of Romanov appear in a variety of places. One of the evidences of that life is the inscription on the window glass of the second floor facing the Neva Embankment. It was made by Empress Alexandra Feodorovna with a diamond: "Nicky 1902 looking at the hussars. 17 March" ("Niki 1902 watches the Hussars. March 17"). The couple had only three years to live in Winter. 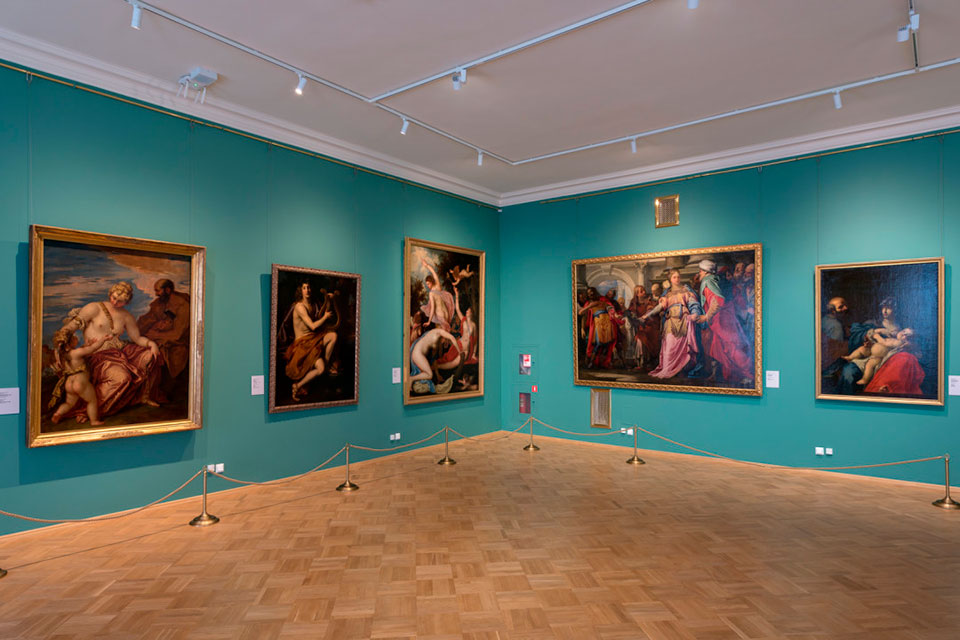 7. According to one of the museum myths, the Hermitage funds hold many unpublished masterpieces. Sometimes interesting finds do happen. So, in the 1960s, the Hermitage was visited by the Dutch art critic Herbert Haverkamp-Begemann. He noticed the edge of a sheet behind one of the cabinets. It turned out to be a huge (228 by 170 cm) drawing of "Bacchus, Ceres, Venus and Cupid" by the Dutch mannerist Hendrik Goltzius. Since then, finding something like this in the storerooms of the museum remains the dream of every new curator. 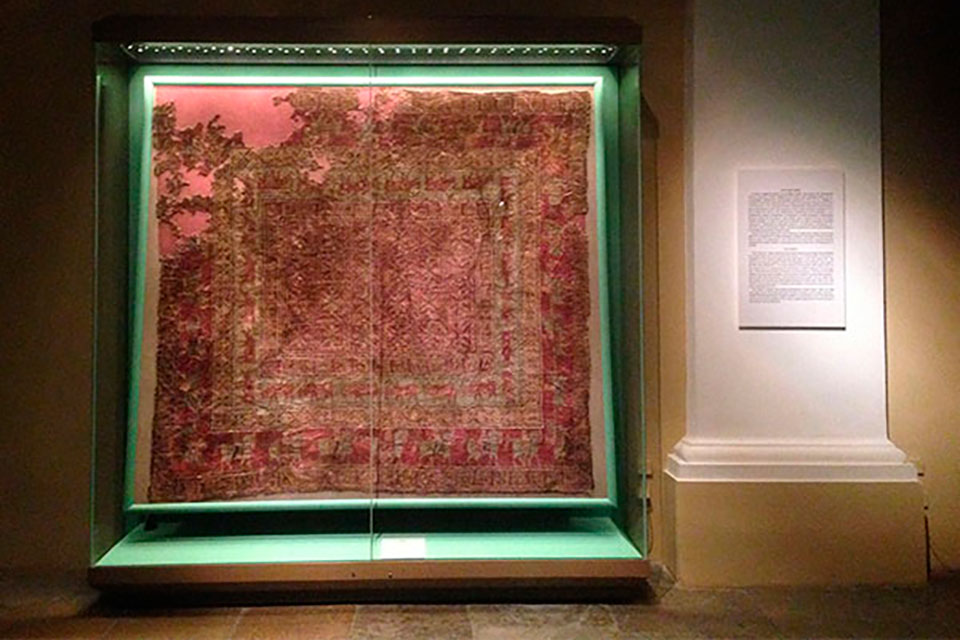 8. Some of the most unusual exhibits of the Hermitage are organic. Here are the most ancient wool carpet, Chinese silk fabric and tattoos on human skin. These are some of the artifacts found in the Pazyryk tract in Altai, on the territory of which 5 mounds of Scythian time were discovered. Due to the fact that the burials were under permafrost, they preserved a unique amount of organic materials. In the Hermitage, such exhibits are stored under strict temperature and humidity conditions.