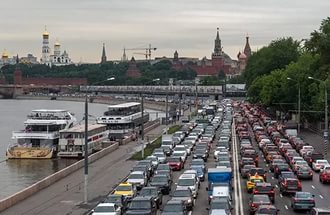 Moscow has been named as the world capital of traffic jams in 2018 in an annual report released by the INRIX automotive analytics company.

In the rating, Moscow edged out other global cities renowned for traffic congestion including Istanbul, Bogota, Mexico City and Sao Paulo. Other Russian cities in the ranking of 220 included St. Petersburg (9th place), Rostov-on-Don (33rd) and Nizhny Novgorod (39th).

Moscow drivers on average waited 210 hours in traffic queues last year and reached an average speed of around 18 kilometers per hour, according to the research published on Monday.

Moscow government’s transportation branch rejected the findings, saying that the methodology of the study was unclear.

Last year, Russia’s capital was ranked as having the second-worst traffic in the world after Los Angeles in the INRIX study. This year, the Californian city was deemed to have drastically improved its rating, and rose to 47th place overall.